⚡ It’s an all styles, all genres, anything goes showcase of the latest local, organic, Non-GMO, Oklahoma short films. No, these films don’t have anything to do with farming. Plus, a few special surprises thrown in. Including a little bit of GMO and Uncle Jerry’s Famous River Otter Revue (schedule permitting).

A young man goes about his day with one question on his mind: “Are you gonna do it?”

James wakes up in a minivan with some strange people. He doesn’t know why he’s there or why these people are taking him to Nashville. He doesn’t like country music.

A man is fixated on catfish until an epiphany about their place in the food chain.

This short video devoid of audio explores how one pieces together a sense of self through belongings.

A man’s wife goes missing. Can he do what it takes to get her back?

I LOVE YOU LIKE SCIENCE – 7:12 mins
Director: Mat Miller

A poem from a broken heart.

On her walk home, Sarah stumbles upon an old, mysterious book. The book, seemingly harmless, slowly reveals an ancient curse, and the consequences imposed upon those who read it.

Barry has a meeting with his employees. It does not go as expected.

1st Place Winner in the 24 Hour Video Race hosted by Living Arts in downtown Tulsa. Filmmakers had to write, shoot, and edit a short video in 24 hours. There was a surpise theme, prop, and line of dialogue that each team had to incorporate.

A short horror film about a married couple. The husband becomes so unemotional and detached, it drives his wife to the extreme.

The marvelous Michael Rooker (The Walking Dead, Guardians Of The Galaxy 1 & 2, Mallrats, Slither) makes an appearance in this proof of concept short film for an upcoming horror feature film.

Legendary Hollywood actor/director – CLU GULAGER (The Last Picture Show, The Return of The Living Dead, Nightmare On Elm Street 2, The Virginian) will be giving an exclusive demonstration of his famous CLU GULAGER’S Film Acting Workshop. Along with Clu’s son, filmmaker JOHN GULAGER (Feast, Piranha 3DD) and actress DIANE AYALA GOLDNER (The Collector, Halloween II, Feast II)! They will also be screening never before seen films and scenes from past workshops.

The workshop explores the esthetics, the practical challenges, and etiquette of being on a film set. …how the camera, the microphone, and lighting influences, interprets and magnifies your performance, ….how to hit your marks, …how and why we match and repeat, …and the hierarchy of being on a film set, are some of the many valuable tools new actors will learn and seasoned actors will have the opportunity to practice.

The workshop is good for both beginning and experienced actors, directors, and scriptwriters. Or if you’re just simply curious and want to come sit in and watch. Open to everyone!!! This is a once in a lifetime opportunity.
7:15pm – 8:15pm
$10 – Buy Now

Chock full of outraged aliens, wild dogs, Instagram malaise, and the private pursuits of the artist

He’s trying to stay awake in an afternoon class.

A newly minted Instagram star who found his fame by befriending a tribe of friendly deer.

An old woman has a strange subterranean encounter.

Two runaway teens steal a car with dreams of heading down to Florida, but things take a dark turn after a dangerous game.

The uncompromising voice behind the first gay themed country music album – 40 years after its release.

A plastic surgeon is creating in real time the new goddess of beauty.

An experimental short film about extremes. 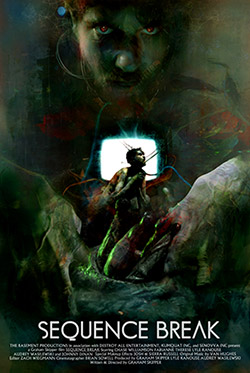 GRAHAM SKIPPER (Writer/Director) is best known as an actor in the indie horror sphere, starring in films such as Joe Begos’ ALMOST HUMAN & THE MIND’S EYE, Jackson Stewart’s BEYOND THE GATES, & Mickey Keating’s CARNAGE PARK among others. He also originated the role of “Herbert West” in Stuart Gordon’s stage production of RE-ANIMATOR THE MUSICAL. SEQUENCE BREAK marks Skipper’s feature directorial debut. More info available at www.GrahamSkipper.com.

CHASE WILLIAMSON (OZ) Made his screen debut in Don Coscarelli’s JOHN DIES AT THE END opposite Paul Giamatti. Other film credits include THE GUEST, BEYOND THE GATES, SIREN, LACE CRATER and a recurring role on VIDEO GAME HIGH SCHOOL.

FABIANNE THERESE (Tess) is best known for the films TEENAGE COCKTAIL, SOUTHBOUND, FRANK & CINDY and JOHN DIES IN THE END. Her TV work includes THE SKINNY, AQUARIUS and THE TRIVIAL PURSUITS OF ARTHUR BANKS with Adam Goldberg & Jeffrey Tambor.