⚡ Legendary actor / director Clu Gulager (The Last Picture Show, The Killers, The Return of The Living Dead, Nightmare On Elm Street 2, The Tall Man, The Virginian)  LIVE in person, presenting a selection of rare and never-before-seen short films and fragments of feature films which he directed, dating back to 1969. Plus, Q&A and signing.

The Dundee Project – 19mins
⚡ (Midwest Premiere) – 81 mins
Director: Mark Borchardt
In his long-awaited follow-up to 1997’s Coven, filmmaker Mark Borchardt steps behind the camera again with The Dundee Project, a documentary chronicling a small town UFO festival in Wisconsin. Featuring interviews with eccentric locals, including “UFO Bob,” the film explores the annual ritual, which is equal parts sky watching and heavy drinking, and leaves Borchardt pondering whether any of it really happened at all.
10:00pm – 11:40pm
$10 – Buy Now

⚡ a documentary film by Tyler Hubby

Tony Conrad: Completely in the Present is a non-fiction film examining the pioneering life and works of artist, musician, and educator, Tony Conrad.

Tony Conrad was one the great American artists of our time, yet to the world at large he remains criminally under appreciated. Since the early 1960s, Conrad’s films and compositions have been the stuff of legend for artists and musicians everywhere. His vast, inter-disciplinary repertoire has single-handedly created and influenced major film and compositional movements. He performed in and recorded the soundtrack to Jack Smith’s legendary Flaming Creatures; he turned the paradigms of cinema upside down with The Flicker, a film composed of only black and white frames; his development and practice of Just Intonation and Minimalism through his work with Stockhausen and La Monte Young still has the music establishment scratching their heads; his pivotal role in the formation of The Velvet Underground has directly or indirectly influenced everyone who has picked up a guitar since; as an early adopter of activist public access television he democratized the emerging medium of portable video. In his later years he continued to perform and make work that pushed the boundaries of reason for which he has finally begun to receive worldwide attention.

Utilizing intimate footage of Tony and his collaborators shot over the last twenty-two years, as well as his own archive of recordings and films, Tony Conrad: Completely in the Present mirrors Conrad’s own playfully radical approach to art making. The non-linear structure allows Conrad to wildly free associate his streams of consciousness, revealing an honest and humane way of navigating a remarkable, creative life. 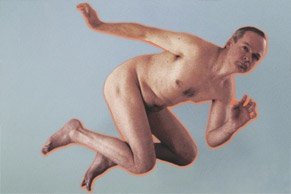 A film about love and regicide

In a posh, swanky restaurant, a neurotic man’s perfect meal is interrupted by an unexpected little guest.

EVERY GHOST HAS AN ORCHESTRA – 7:10 mins
Director: Shayna Connelly

The question of what happens after we die is a universal question explored by paranormal researcher and experimental composer Michael Esposito. He straddles the line between spiritual and material and asks the audience to reflect on our purpose, legacy and what our actions say.

Starring Shank The Ripper. Don’t laugh at him or you’ll regret it and end up getting tortured in the dungeon.

An animated series concept about 9/11, a single gay father and his adopted son, Nathan, living together in a quiet, suburban town in America.

A confused man wakes up in a room and doesn’t know how he got there. What choices and consequences await him as he tries to leave?

The journey of a flying fish.

A visual and audio journey that shows you all the things you push to the back of your mind.

A recently released criminal is looking for a good time. He can forget his sins but he can never forget…Gwilliam.